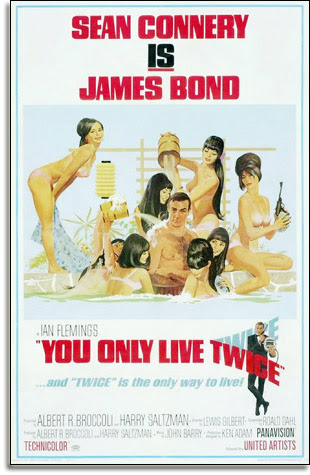 At the time of its release You Only Live Twice must have played really well. It boasts a story that was loaded with relevance at the height of the cold war, taking in both the space race and the threat of mutually assured destruction between the US and Russia. In Donald Pleasence’s Blofeld it has an iconic villain. Sean Connery, in his fifth Bond, contributes a vigorous and entertaining performance; one that distils everything that defines Bond, and the action sequences are exciting, varied and well excuted.

The one thing the film really suffers from is the lack of a greatBond girl. Bond meets and hooks up with several Japanese lovelies, but none really contributes anything memorable. Another problem is a long sequence in which Bond is made up as Japanese man. The effect, to quote Blackadder, is as convincing as a giraffe in dark glasses attempting to get into a polar bears only nightclub. And, if not out and out racist, it’s certainly an uncomfortably anachronistic sequence.

The more pressing problem with seeing You Only Live Twice now, for the first time, is that it plays less like a Bond film and more like Austin Powers. It’s so nakedly the template for Mike Myers’ first spoof outing that I found it difficult to take the film seriously. That’s not a fault of the film, but it does mean that You Only Live Twice plays very differently now than it would have in 1967. Still, this is a very solid Bond film, and a highly entertaining piece of hokum.
Posted by Sam Inglis at 11:49