After I saw Up I called my mother. I told her that the three of us; me, her and my step-dad, had to go and see Pixar’s wonderful latest, and I informed her that if she didn’t cry at least twice, I no longer wished to know her.

I was lucky enough to discover Pixar just a little before everyone else. I went to a preview screening of Toy Story, about five days before it opened, and was absolutely blown away by it. I believe I spent most of the next school week talking it up to friends. Since then I’ve seen everything the company has put out, and been charmed and awed by much of it. Lately though, I’ve felt like they’ve been going through a rough patch. Beginning with the colossally overlong and often rather unengaging Cars, Pixar had stopped, for me at least, being as great as once they were. Last year’s WALL . E was progress - half a masterpiece - but I had held out little hope for Up. I didn’t really love the trailers, the story didn’t seem massively enticing and, as you may by now have noticed, I haven’t exactly warmed to 3D. It is, then, an unreserved joy to report that Up not only sees Pixar back on truly winning form, but it is a masterpiece, an instant classic, and the single best thing they have produced besides Toy Story 2.

Up has, as is the case with most of Pixar’s work, a rather simple story. 78-year-old Carl Fredricksen (Asner) has just lost his wife, and he’s about to be evicted from his house and placed in an old people’s home. So Carl uses hundreds of thousands of helium balloons to float his home free of its foundations and off on the adventure he and his wife Ellie always meant to have. Along for the ride is Russell, a young ‘Wilderness Explorer’ desperate to gain his assisting the elderly badge. The best part of Up happens before that story begins. The film’s opening quarter of an hour documents, first in a sweet and funny, but very straightforward sequence and then in a silent montage, Carl and Ellie’s seventy years together. The montage is perhaps the best single sequence that Pixar have ever produced, and five of the most moving minutes in cinema. It boils down to just a few images all the tenderness, the joy, and the pain of a shared life. By the end of that sequence I was in floods of tears (actually, I’m getting emotional thinking about it now). Though it isn’t really part of the main story that sequence is the keystone around which everything else is built, and the way it resonates throughout the film is really extraordinary. Ellie never has a voice as an adult, and yet her presence (or the lack of it) is the driving force of this film. Up is a brilliant film as whole, but that opening is a truly awesome achievement.

Thereafter Up becomes slightly more traditional. That’s not a slight by any means, because few do this better than Pixar. The film becomes a hilariously funny mismatched buddy movie as Carl and Russell, along with a female bird named Kevin and a talking dog called Dug (a brilliant vocal performance by co-writer/co-director Peterson), attempt to float Carl’s home to the place where Ellie always wanted to live while also trying to avoid an adventurer (Plummer) who has spent his life trying to capture Kevin. The gags come thick and fast, but they are always rooted strongly in character. This is something Pixar have always done well; they create truly three-dimensional characters. Carl, in particular, is a complex and layered character. Many jokes come from the fact that he’s old and cantankerous, but there’s also warmth there, and real motivation for how disengaged he’s become. Though the film is just 96 minutes long director and co-writer Docter takes his time, he allows the characters and their relationship to grow organically and realistically. As much as it is due to Docter and Peterson’s screenplay, the fact that Up, and the central relationship between Carl and Russell in particular, works so well is also down to the sensitive performances. 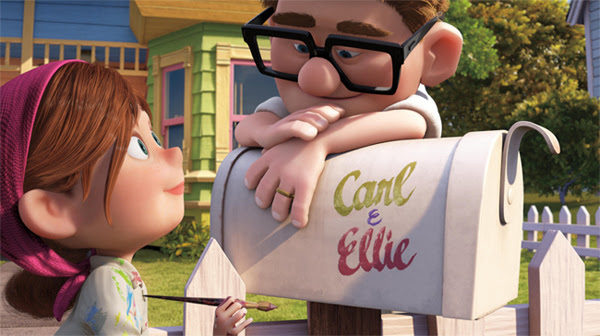 No voice actor has ever been Oscar nominated for their work. Ed Asner ought to become the first. His characterisation of Carl is as deep and detailed as any that has been seen on screen this year. He’s extremely funny, but also wrings every drop of emotion out of the moments when Carl talks to his late wife and out of his growing fondness for Russell, without ever overplaying a moment. As Russell, 9-year-old Jordan Nagai is also splendid. His dialogue is that of an 8-year-old; complete with all the complaining, all the over excitement, and all the moments that he can’t quite edit himself, that you might expect. Nagai plays Russell with an openness and innocence that is hard not to warm to and, like Asner’s, his performance never feels acted. You identify with these people, despite the fact that all they are is a collection of pixels, and much of that is thanks to Asner and Nagai. Credit is also particularly due three more members of Up’s vocal cast. Christopher Plummer lends his authoritative tones to the film’s villain, making him pretty chilling. Bob Peterson gives a pair of hilarious performances as ‘talking’ dogs Dug and Alpha. Dug comes close to stealing the show at times, and is easily the funniest thing in what is a very funny film. Elie Docter has only a small role, but it is in some ways the most important in the film, as she voices the young Ellie, and it is her sweet, slightly lisping, infectiously energetic performance that gives Ellie the personality and warmth that then powers the film.

Of course those voices are only half the acting job of an animated film, and Pixar’s team of animators have, once again, outdone themselves. It’s not just the technical mastery - the photo real backgrounds of Paradise Falls, the realistic stubble on Carl’s face, the fur on the many, many dogs - it’s the fact that the animation is so fluid and real that even though the characters are stylised, and not really remotely like real humans, that you never question the reality of the film. There’s such mobility, such subtlety of expression, in all the character models that Pixar often don’t need their voices to make you laugh or make you cry.

The 3D is technically perfect, and for the first time I didn’t find that the process took me out of the film. However, I’m still not convinced that there’s any point, beyond a commercial and anti-piracy one, to using 3D. There’s not a single shot in Up that suggests that it needs to be in 3D. Yes, the depth illusion works well, but it isn’t as if 2D has ever had a problem in portraying depth (the trailer for Man on Wire gave me vertigo just as effectively as some of the flying sequences towards the end of Up did). 3D is a gimmick, plain and simple, it’s a gimmick that, sadly, darkens the very specific colour palette that Docter and Peterson have used for this film, and thus I can’t really see the 3D version as the proper version of the film. However, in this case, 3D is a gimmick that Up is simply too good to be messed up by.

Up divides quite neatly into three acts, and if there is any downside at all to this film then it is that the second act, in which Carl and Russell begin their adventure, is perhaps not as stunningly brilliant as the rest of the film. It suffers from a slight lack of momentum. But this is no more than hair splitting. Even in these sequences Up is better than almost any other film released this year, it just isn’t quite soaring to the heights achieved by the rest of the movie. The finale really picks up, with a series of genuinely perilous looking and exciting action sequences. Even here though Pixar never forget to bring the funny, with a particularly gut busting joke during a ‘swordfight’ between Carl and Christopher Plummer’s Charles Muntz.

Up is genuinely stunning cinema. What I really want from a movie is to be affected, and in that respect Up delivers over and over. I laughed over and over and I cried three times. I honestly don’t see how you could remain unmoved by this brilliant film. See it in 2D, see in 3D, just make sure that you see it.
Posted by Sam Inglis at 08:43