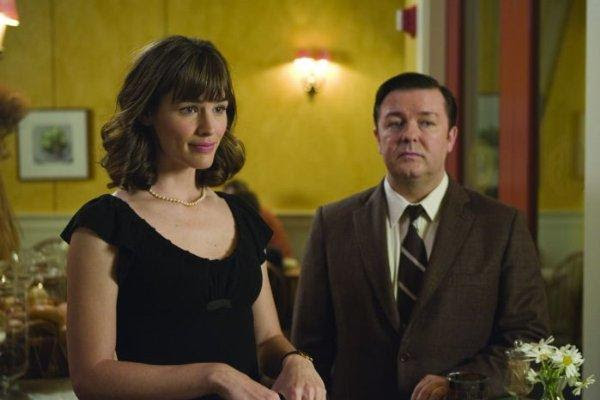 Previously, whenever I’ve seen Ricky Gervais, I’ve almost been overcome with the desire to punch him in his pudgy, perma-smug, face. In this respect The Invention of Lying represents some progress.

In his second Hollywood lead Gervais isn’t as irritating as usual, and even makes for a passable everyman hero (though he’s no Jimmy Stewart). The film has a very simple conceit: nobody can lie, until one day Gervais - as Mark Bellison, though, let’s be fair, he’s playing Ricky Gervais - finds that he is suddenly able to say things that aren’t true. The inability to utter an untruth is complemented by the fact that everyone in this parallel world seems to be unable to edit what they say, and so, for example, when Mark turns up to pick up his blind date (Garner) she greets him with a cheery “I was just masturbating”. That’s the joke.

And that’s the problem at the heart of The Invention of Lying; that is THE joke. Every single joke in the film grows out of this conceit. It’s not a bad joke by any means, but it wears very thin long before the film’s 100 minute runtime is even close to running out. When you’ve only got one joke the success is all in the telling, and there are some people in The Invention of Lying who tell the joke very well indeed. Tina Fey and Jeffrey Tambor score in small roles as Gervais’ secretary and his boss, but it is Rob Lowe who threatens to steal the film. I’ve liked Lowe as a comic actor ever since Wayne’s World, and here he essentially plays a 100% honest version of that character - loathsome, slimy and often very funny.

The other real laughs in the movie tend to come from the margins, especially with the astute parody adverts; “Coke: it’s very famous.” and “Pepsi: When they don’t have Coke.” At about the midway point of the film Mark’s mother dies, and to comfort her in her last moments, Mark invents Heaven. This should have been the point at which The Invention of Lying really took off, it could have become a truly smart and biting satire of the way that religion lies to and exploits people. Sadly it lacks the courage, and instead sticks to its one established joke.

The romantic comedy aspect of the film doesn’t really work, mainly because it is undermined by the fact that there is little chemistry because Garner’s character constantly restates that she’s not attracted to Gervais. This also undermines the idea that he’d be attracted to her. She’s very pretty, granted, but when Mark says that she’s the most wonderful person he’s ever known you’ll scoff at the idea, because she’s seldom been anything but rude to him.

There are lots of little problems with The Invention of Lying - the boring sitcomish look, the logical lapses (why, and how, for example is Edward Norton playing a corrupt cop, given that nobody in the world can lie?), the lack of appetite to say or do anything really smart or challenging, the self conscious celeb cameos. The thing that really sinks the film, though, is that its one joke just isn’t all that funny.
Posted by Sam Inglis at 13:52