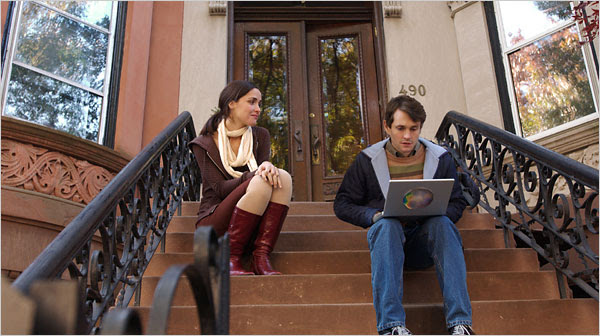 There are no new stories.  There are only new approaches to old ones, and most of the time even that seems out of reach. Adam, however, does manage to give a fresh lick of paint to what, at first glance, seems likely to be a hopelessly cliché romantic-comedy.

Adam (Dancy) is 29, and now that his father has died he’s living alone for the first time, a big challenge because Adam has Aspergers syndrome.  Aspergers is a form of autism which means that Adam doesn’t understand emotion and can’t tell what people are thinking.  One day a pretty young woman named Beth (Byrne) moves into his building, she’s attracted to Adam, even after he reveals that he has Aspergers and the two begin a relationship.  That relationship is complicated both by Adam’s condition and by the fact that Beth’s father (Gallagher) is embroiled in a court case that could send him to prison.

Adam is a rare film.  So much current genre cinema is lazy to a degree that is almost crass (The Proposal, for example).  Most of time it is just a collection of stock characters working their way through motions we’ve seen hundreds of times previously with little romance and equally little comedy.  Adam isn’t like that.  Max Mayer may unashamedly be making a genre film (and one that has several extremely unoriginal touches at that) but he does seem to care. Certainly he cares enough to make his characters people rather than just types.

It would have been easy to make Adam himself a completely one-note character, to have his illness define him.  What works really well for the script is the fact Adam has layers, it’s not so much the illness that is interesting as it is his awareness of it and his striving against it.  Beth is also well drawn; warm and supportive but never weak and simpering. Both are quirky, but not in a way that comes off as unreal or out of character.  These sensitively drawn characters are given life by two excellent performances from two lesser-known actors.

Hugh Dancy is wonderful as Adam, really getting under the skin of someone with Aspergers.  He capably portrays someone who doesn’t understand emotion he is still able to let us see what Adam does feel, even when the character doesn’t understand what he is feeling or why.  It’s a finely balanced and beautifully nuanced piece of acting in a role in which it would have been easy to simply be blank.  Rose Byrne’s Beth is as charming as she is beautiful.  Byrne also has to let a lot play under the surface, as Beth constantly has to hold her emotions in whether for the benefit of Adam or that of her mother (Irving) and father.  It’s a much less showy part, and all the harder for that, and Byrne never fails to strike the exact right note.  It’s also worth mentioning that Dancy is British and Byrne Australian, but both show off completely natural American accents.

When the focus shifts from this burgeoning relationship Adam impresses less.  This is especially true of the storyline featuring Peter Gallagher, which is an almost beat for beat lift from Say Anything.  It’s never a good idea to emulate classics; you’ll always come off second best, and such is very much the case with this unnecessary subplot.  The only other major stumble is the way that (as all rom-coms must) the film breaks the couple up at the end of act two.  This obligatory scene seldom fails to ring false, and in that regard Adam is no exception. That aside though, this is a film remarkably resistant to cliché, and all the better for it.

Adam is a sweet, funny and touching film, with characters you can relate to and fall just a little in love with.  It will make a fine date movie, and comes highly recommended. 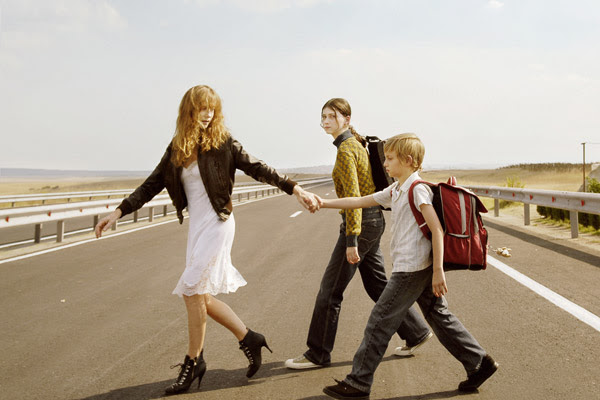 I’ve said it before, and I’m sure I’ll say it again: Isabelle Huppert is among the best actresses ever to grace a cinema screen, and it is tragic that she’s not better known outside France.

Home is a small, low key film, perhaps best described as a road movie that goes nowhere.  It has just five characters, and centres on a single location. A family - mother (Huppert), father (Gourmet) two teenage daughters (Leroux, Budd) and an eight-year-old son (Klein) - have spent ten years living at the side of an incomplete motorway.  Their lives are disrupted when, suddenly, the road is finished and opened to traffic.

That’s it, and that’s not much to hang 98 minutes on.  The story, such as it is, is hardly the most eventful but the film remains engaging because the five central performances are all outstanding.  Isabelle Huppert is a low-key actress, and in that respect Home suits her perfectly.  She doesn’t, on the face of it, have a lot to do here as a normal housewife and mother, but what’s impressive is how little she has to do to convince us of her role as matriarch.  There’s no sense of acting in Huppert’s work, if it weren’t for the fact that she looked so much like Isabelle Huppert it would be easy to believe that this is simply a middle aged woman whose work is as a stay at home parent.  Even as we learn more about Marthe, and that she may be less stable than she seems, Huppert still keeps everything small, subtle and completely real.  It’s a masterclass in being real on screen.

That’s not to say that the rest of the cast fail to match Huppert, indeed this is a true ensemble piece, because we have to believe in the dynamics of this slightly fractious family.  That ends up being one of the strongest suits of Home.  Ursula Meir has managed to find some remarkable young actors to play the children, none of them with much experience.  The dynamic between the three kids is utterly convincing, the way they shout over each other, fight, but ultimately seem to love one another is much more redolent of what family life actually feels like than what you usually see in movies.  There is also a strong chemistry between Huppert and Olivier Gourmet; the sort of affection between them that speaks of two people who have been together and in love for a very long time.  The way that the actors all gel holds what could easily have been a rather dull film together.

A lot of audiences won’t like Home, because they won’t be able to get past its uneventful nature.  Those people will miss out, because there is much to enjoy in the performances and in the beautiful imagery put together by Meir and DP Agnes Godard.  It’s surprising how attractive the film looks, given that it is set entirely on the verge next to a motorway.  It begins to lose steam in the last twenty minutes, when the tone changes quite sharply, but otherwise Home is a low key treat, if you’ve the patience for it.
Posted by Sam Inglis at 19:28