Cinematters :The Sun on Antichrist

I hate The Sun. Rupert Murdoch’s daily helping of right wing lies and hypocrisy masquerading as news. On July 1st, under the headline “Shock and Gore” a writer calling himself ‘The Sneak’ - and, by the way, if you won’t put your name to what you write in a major newspaper whatever you have to say immediately loses credibility - attempted to take the BBFC to task for passing Lars Von Trier’s Antichrist for adult viewing in the UK. The whole article can be read here, but I thought I’d offer some thoughts on some of the stupidest things that ‘The Sneak’ had to say, and on how The Sun presented this ‘story’.

First off let’s have a look at some of the other Sun stories one can peruse through links on this page, shall we. Here is one about how nice Megan Fox looks topless, complete with a large picture. Here is another about how, even covered in blood, Megan Fox is gorgeous. Here's one about Kelly Brook’s breasts now being available in HD, picture and slideshow included. Gosh, The Sun does seem to like nubile, naked, young women doesn’t it? Now, on to the article. Extracts from The Sneak's article are in bold type in block quotes, my own arguments are in normal type.

The Sneak: The British Board of Film Classification used to be referred to as censors. But it seems they have given up on that role.

Sam: No they haven’t. They cut a large proportion of R18 rated DVDs (hardcore porn, sold only in sex shops). Brad Anderson’s Transsiberian was recently cut for a 15, and Satanic Sluts 3 was recently cut by 9 minutes and 25 seconds for an 18. There are plenty more examples, but most of the censorship at adult levels is now for pornography, taking account of the border between 18 and R18. In general though the BBFC’s stated position is that “guideline concerns will not normally override the principle that adults should be free to choose their own entertainment.” Though it does then go on to suggest areas in which this might not be the case. Interestingly the guidelines have recently been revised, after a public consultation in which I and some 8700 other people made our feelings on how the BBFC classifies films known through a questionnaire on their website. This has actually led to some strengthening of the guidelines, and the BBFC has said that if these new guidelines had been in place in recent times several films would have had higher ratings (notably The Dark Knight, which would merit a 15 under the new rules, not unfairly). Interestingly The Sun appears not to have reported on this.

The Sneak: In his sex-filled 1998 film The Idiots, director LARS VON TRIER had to blur out private parts standing to attention.

Sam: No he didn’t. The blurring was for the Channel 4 airing of the film, because legally erections and real sex can’t be shown on UK TV. Check your facts.

The Sneak: The most talked-about film of the moment is SACHA BARON COHEN’s latest offering, Bruno. But while the antics of the OTT fashionista can be eye-wateringly shocking, it is ridiculous that the film has the same 18 rating as Antichrist. All the sex in Bruno is slapstick.

Sam: Except the sex that’s real of course. From the BBFC’s report, giving Bruno an 18: "There are three strong sex scenes in the film… the third scene features sex between couples at a swingers' party, with sexual detail obscured." Weird, a mainstream film you’re saying is rated too harshly at 18 features exactly the same thing (albeit in this case probably optically fogged) that you’re saying isn’t acceptable at 18 in an arthouse film. I think The Sun has this the wrong way round, because honestly, how many 15 year olds will be trying to sneak into Antichrist? 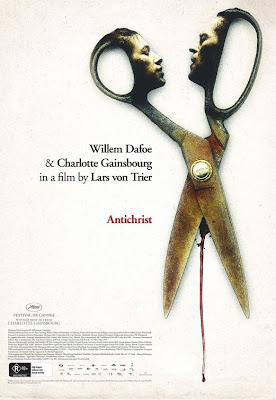 The Sneak: The total gore level on show cannot be properly described in a family newspaper, and if you are eating it would be best not to read on.

Sam: So you can’t describe the gore in Antichrist, but you can leer over how 'hot' Megan Fox is when covered in blood, and dress Kelly Brook’s breasts up as news. How family friendly.

The Sneak: The scenes include Gainsbourg using scissors to cut down below - and this does not refer to a Brazilian.

Sam: Oh, so you can describe the gore. And what if it did refer to her giving herself a Brazilian? Would that be okay at 18? Frankly, knowing what I know about the film, that would be much more exploitative than the scene that actually exists. Also, you do realize that none of the close ups of this act shows Charlotte Gainsbourg’s anatomy (and neither, by the way, does the one hardcore insert shot)?

The Sneak: Gainsbourg slamming a concrete block into Dafoe’s manhood before performing a sex act on his battered parts is much worse.

Sam: You do know you’re still describing the gore, right? edit: Having seen the film I can tell you he's got his facts wrong here, it's a plank, not a concrete block

The Sneak: The BBFC only cuts scenes if they involve illegal material or are potentially harmful, or the sexual violence is there for the purpose of arousal.

Sam: Bollocks. The BBFC cuts scenes for many, many reasons. Imitable fighting techniques, glamorisation of drugs and weapons, language, intensity and all manner of other things come into the decision. What you are doing is quoting the guidelines for adults and pretending that they are the guidelines applied across the board. Also, why is it a problem that these are the guiding principles for censoring films intended for adults?

The Sneak: The sex in Antichrist is certainly too unpleasant to gratify most normal people.

Sam: You do know that saying that completely undermines your argument, don’t you?

Sam: In what respect? Has there been a spate of copycat crimes since the release of these films? Is there evidence that even one member of the audience for those films has been depraved and corrupted by them? If you’re trying to suggest that people are sexually aroused by these films then, guess what, you’re way off base. First of all there’s no evidence to show that there is any sort of sexual gratification for audiences seeing these films and secondly you’re missing the point of seeing horror movies. Audiences don’t go with sexual arousal first and foremost in mind, they go to be scared, and what’s wrong with that?

Sam: There’s a revelation for you, different regimes at BBFC, 25 years apart, rated two completely different films in different ways. SCANDAL. Plus, as I pointed out, BBFC has recently tightened their rules, saying that several films, if re-submitted, would get higher ratings. How odd that you don’t mention that.

The Sneak: The BBFC need to find a better way to warn cinema-goers what they face - because it will not just be the critics left disgusted by Antichrist.

Sam: Really? Better than having FOUR websites, one geared specifically to parents? Better than having extended classification information available for every film classified in the last three years, which itemises the issues and scenes BBFC considered in rating each film? Better than having a box on every film poster detailing the general reason for the certificate? Better than having a public consultation over its guidelines every four years? Anyone who is going to see Antichrist will be going in with their eyes open (especially given coverage like this), they may be disgusted, but they’ll be ready for that, and again, what’s, in and of itself, wrong with that?


I've emailed The Sun, marking the email FAO: The Sneak, included the entire text of this rebuttal and asked if 'The Sneak' would care to comment on my comments. I'll post anything I get back from him.
Posted by Sam Inglis at 16:28