News: Bruno cuts, Let Me In posters and more

BRUNO
Sacha Baron Cohen’s deeply unfunny ‘satire’ has just been passed (for a third time) by the BBFC, this time at 15. Bruno (Snipped) opens on Friday; just under two minutes have been cut from the film in order to secure the new certificate.

Even at 15 Bruno seems unlikely to be inoffensive, so you’d be advised to listen to this man, from a cinema in Navan, Ireland before going to see it. 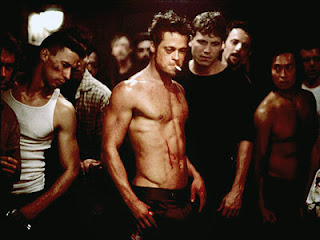 17-year-old Kyle Shaw was recently arrested, and charged with arson and possession of a weapon in connection with the May 25th bombing of a Manhattan Starbucks. It has been reported that Shaw was obsessed with inspired by Fight Club. You’d think that, if he were obsessed with the film, he might have understood that it is AGAINST Project Mayhem.

This week in pointless ideas

Yep, it’s time for remake news. This week: Straw Dogs. Sam Peckinpah’s censorship magnet is, predictably, to be reset in the US with James Marsden and Kate Bosworth in the Dustin Hoffman/Susan George parts. Alexander Skarsgaard (son of Stellan) is to play an ex of Bosworth’s who torments the couple. Former critic Rod Lurie (The Contender, Nothing but the Truth) directs from his own screenplay. I don’t see the point of this - the original Straw Dogs is as powerful and as troubling as it ever was. It just better not be a PG13.

Clearly recognising a profitable idea when they see one publisher Quirk Classics are rushing out a follow up to the surprisingly well reviewed Pride and Prejudice and Zombies. Sense and Sensibility and Sea Monsters adds 40% new text to Austen’s original story. Zombies is in development as a film, look for this to follow suit. Here’s a synopsis:
Sense and Sensibility and Sea Monsters expands the original text of the beloved Jane Austen novel with all-new scenes of giant lobsters, rampaging octopi, two-headed sea serpents, and other biological monstrosities. As our story opens, the Dashwood sisters are evicted from their childhood home and sent to live on a mysterious island full of savage creatures and dark secrets. While sensible Elinor falls in love with Edward Ferrars, her romantic sister Marianne is courted by both the handsome Willoughby and the hideous man-monster Colonel Brandon. Can the Dashwood sisters triumph over meddlesome matriarchs and unscrupulous rogues to find true love? Or will they fall prey to the tentacles that are forever snapping at their heels? This masterful portrait of Regency England blends Jane Austen’s biting social commentary with ultraviolent depictions of sea monsters biting. It’s survival of the fittest-and only the swiftest swimmers will find true love!

Let Me In
Hot on the heels of news that The Road’s Kodi Smit McPhee is a finalist for the Oskar role (renamed Owen) come three early posters, produced merely as sales material for Hammer’s Let the Right One In remake. They are great posters too, creepy and beautiful in equal measure.

Also Out: Charles Dickens’ England, The Blues Brothers (R/I), Once Upon a Time in the West (R/I)
Posted by Sam Inglis at 13:13