Is there anything worse than a movie that thinks it’s incredibly intelligent, but which is actually deeply stupid? There is a gigantic problem right at the centre of the conceit of this Spanish thriller, which sees four mathematicians invited to solve ‘the greatest enigma ever posed’ only to find themselves in a square room in which each wall is a hydraulic press,
every time they take too long to answer a mathematical riddle the walls begin to press in on them. Spotted the problem yet? I’ll tell you later.

If that logic problem were the only major issue with the film then I’d probably recommend it, there’s nothing particularly wrong with thrillers requiring a large measure of suspension of disbelief, but that’s just the beginning of the problems with Piedrahita and Sopeña’s cinematic debut. Far more pressing an issue is the fact that Fermat’s Room doesn’t have an original thought in its head, most of the time it is like watching uninteresting deleted scenes from better films (mostly Vincenzo Natali’s creepy Cube) the difference being that Fermat’s Room is so pre-occupied with its puzzles that it forgets little things like character, momentum and intrigue.

The performers aren’t bad, but the characters are simply uninteresting. By the time that the connections between them were revealed I had not only long ago guessed who was responsible for their predicament, but I’d long since stopped caring what happened, because none of the characters has much of a personality. It is, as ever, worth mentioning Federico Luppi, because though his particular role in proceedings is very obvious he’s a fine actor who brings real gravitas to whatever he does, and he acts everyone else off the screen here.

To their credit Piedrahita and Sopeña do manage to keep the film from being visually boring because, though it is almost entirely set in a single room, that room changes so much that it allows the visuals to stay fresh. I just wish that rather more time had been spent writing a set of characters worth caring about and rather less coming up with ‘clever’ problems that, for the most part, aren’t especially difficult.

And so back to the problem I posed. Why doesn’t the film make sense? Simple, all four walls of the room are mounted on hydraulic presses so (even if you accept the massive leap of faith the nobody spots this before entering) the walls CAN’T move, the minute the presses start they will simply hit one another and refuse to budge. It’s such a simple and obvious problem, and so easy to fix; just go through the script and change four to one, that it beggars belief that nobody on set saw it, and that, sadly, is indicative of the lack of big picture thinking that pervades this bitty and boring film. 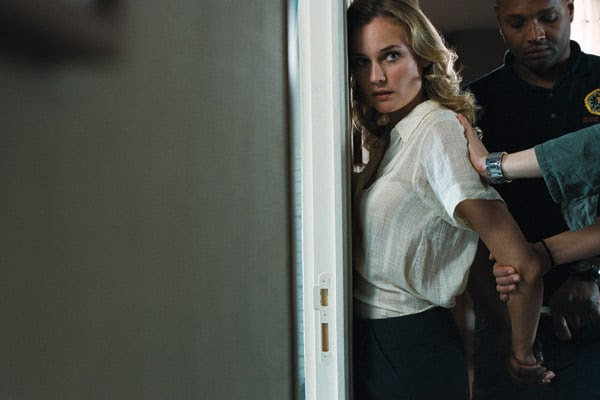 Fred Cavayé’s film is very much a genre entry, so much so that it feels almost like an off the shelf thriller, not so much crafted as it has been reached down, dusted off, and put on the screen.

That’s not a terrible thing, there is a reason that genre films are popular, and if done well they can be near peerless entertainments. Anything for Her isn’t anything like that good, but as generic thrillers go it’s a perfectly solid one. The story has young wife and mother Lisa (Kruger) arrested and imprisoned for a murder she didn’t commit (that’s not a spoiler, we find that information out early on). Three years later, her final appeal a failure, her French teacher husband (Lindon) decides that he’s going to break her out of prison and go on the run with their five-year-old son.

The biggest problem with Anything For Her is simply that we as an audience know too much. The fact that, within the first half hour, we know that Kruger isn’t guilty removes a lot of potential complexity from the film. Thrillers thrive on exploiting gaps in our knowledge, or in the characters knowledge, and there simply aren’t enough of those gaps here to make Anything For Her engage on many levels besides the visceral.

However, thanks to Cavayé’s solid direction, several sequences really do thrill on that visceral level. Two sequences in particular get the pulse pounding. In one Lindon steals money from a drug dealer, in order to finance the breakout and subsequent escape. The escape sequence itself is a beautifully choreographed extended set piece, even if it’s not an especially surprising one. Still, the film as a whole moves at a good pace, and it’s never boring. What helps lift Anything For Her slightly out of the painfully ordinary is a pair of strong leading performances. Vincent Lindon; late 40’s, face like cracked leather and Diane Kruger; early 30’s, porcelain beauty make for an odd couple, but there is chemistry between them, enough that you buy not just their relationship but the fact that it has survived Lisa’s conviction and first three years in prison. Individually they each give strong performances but Lindon, whose intense show is the focus of the movie and whose desperate descent into criminality is genuinely compelling, is by far the standout here.

Anything For Her is far from great, in fact it's pretty forgettable, but it’s a perfectly acceptable way to pass 96 minutes. It’s brisk and entertaining, with solid direction and performances and as long as you don’t expect anything life changing you’ll likely enjoy it.
Posted by Sam Inglis at 13:46