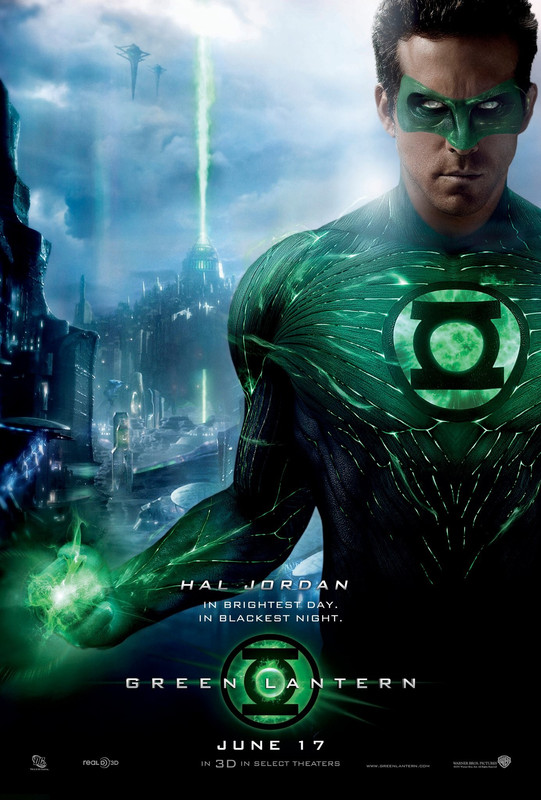 I've been trying to think of a pithy line to open this review, perhaps something based on the Green Lantern's rhyming oath, but I'm coming up dry. So how about this? Green Lantern is bollocks. Boring, ugly, badly written, plot hole riddled, nonsensical, unexciting, bollocks. Okay, it doesn't rhyme, but I feel I've made my point.

Based on the DC Comics series, Green Lantern spins a complex mythology (through laughably po-faced narration from Geoffrey Rush) of a universe split into about 3600 sectors, each protected by a superhero who uses the power of a green lantern and ring to harness his will and fight evil. Will was chosen because, apparently, its green energy is the most powerful (safe) power source in the universe. But there is an enemy coming; Parallax, whose yellow fear energy (I swear, this is really the plot) is endangering the universe. When one Green Lantern dies, their ring chooses another, so, obviously, when purple alien Temura Morrison shuffles off, the ring picks military test pilot and (un)professional asshole Hal Jordan (Ryan Reynolds) to save the world. Stupid ring.

Where to begin with this movie? Perhaps the film's weakest link (though, gosh, it's a close run thing) is its look. This is a pig ugly movie, and that's before we get to discuss the 3D. CGI has advanced to a point where it can do almost anything, but Green Lantern leans so heavily on it that it becomes a serious problem. The opening scenes, with the narration, are rendered almost entirely in CGI, and despite the fact that the technical side of things is reasonable (not great, but reasonable), the feeling of watching the opening cut scene for a console game is unshakeable. The problems, however, really become clear once the film becomes Earthbound. The first shot of a human is of some nameless conquest of Hal Jordan's, she is a gorgeous girl, blonde, about 25, and there's just something off about her, she doesn't quite look real. It's a problem that persists in the film; there is a sheen of unreality to it. I wonder if director Martin Campbell and DP Dion Beebe used a lot of CGI in post production to augment the film's lighting, because even the light in this movie just feels... wrong. It's hard to explain, and I don't think it's the 3D, but if you see the film (don't) you'll know what I mean the first time human appears.

That's not the only problem with the film's look. The colour scheme is pretty ugly; glowing neon green dominates, and this too is primarily realised with CGI. I'm beginning to think that every time a filmmaker wants to do a CG shot they should be made to justify in writing why they can't do it practially, and what purpose the CG will serve the storytelling. I can see why Campbell had to realise the various things that Hal calls forth from the ring with his will (a race car track, guns, etc, etc) in CG, but his suit and mask? Really? Okay, so it glows, and gives off green static, and this adds what exactly? Certainly it doesn't add enough to make up for the fact that it looks so hilariously stupid. The mask is especially terrible; the look, the texture, the feel of it, it just doesn't work, and that also applies to the rest of the suit. It's a problem, in a superhero movie, when the hero appears in costume and your first reaction is barely stifled laughter.

The script is awful; cliché in the extreme (the flashback to fill in Jordan's daddy issues may actually be from another film it's so hackneyed) and so riddled with half-finished ideas, characters and scenes that one suspects that the studio saw an early cut of this trainwreck and ordered an editor to come in with a machete in each hand and set about a 150 minute film until it only ran to 100 minutes. The arc of Peter Sarsgaard's villainous Hector Hammond (infected by yellow fear energy of Parallax, again, really) suffers most. He goes from nerdy scientist to world-destroying large brained maniac in the space of perhaps 12 minutes of screen time, something that even an actor as good as Sarsgaard is (and, bless him, he's even trying to give a performance here) just can't sell without motivation and character development that goes beyond a two minute infodump. Also compromised by the writing are the smaller supporting characters, like Tim Robbins as Sarsgaard's senator father, Reynolds' friends and family (there is a heartfelt talk with a nephew who is then totally forgotten) and Mark Strong as Lantern leader Sinestro (oh, I wonder if he's a villain in the sequels).

The script is also an issue when it comes to Blake Lively's thin role as love interest / endangered prop Carol Ferris, but more of an issue is Lively's fundamental miscasting. Carol is a fighter pilot, and one of the high ranking executives in her Dad's aviation company. Now, I've got a lot of time for Blake Lively, she's clearly very talented and I think she'll go far in the future, but COME ON she's 22. A crack fighter pilot? A VP of an aviation company? Blake Lively? Total miscasting aside, Lively works hard and is actually much better than the film deserves, but still, when Reynolds says to her "You're a fighter pilot Carol" you'll have to struggle to restrain yourself from bellowing 'no she's not' at the screen.

While Sarsgaard and Lively at least try, Ryan Reynolds barely shows up (not that he needs to, with the CGI doing so much of the work for him). He's on autopilot throughout and, for the first time, a charisma-free zone. Part of the problem is, again, the writing, which makes Hal more than a bit of a dick, and never lets him enjoy his powers. He's not an easy hero to get behind, and that robs the films (brief and perfunctory) climax of any real investment or import.

Other little things annoy, but most of all the sheer familiarity of it all, from the Top Gun rip off action scene to an off the peg training montage (featuring Michael Clarke Duncan voicing, again I'm not making this up, Kilowog - yeah, stay classy movie) is what really kills the movie, because it renders it boring as well as poorly put together. It's not even bad in a way insane or notable enough to be fun. Right down to its rubbish 3D conversion (splice in a paragraph from any 3D review I've done here), Green Lantern is lazy filmmaking for undemanding herds of moviegoers. I think we deserve better, don't you?
★☆☆☆☆
Posted by Sam Inglis at 18:01