This list is in alphabetical order by film title.

Ask anyone what the best one scene performance in cinema is and it’s likely they’ll at least mention this one and in spite of endless repetition and being quoted and spoofed hundreds of times over Baldwin’s stream of foul mouthed invective, designed to motivate a team of worn out real estate salesmen, retains all of its power. It helps, of course, that he’s got David Mamet’s dialogue to chew on (Fuck you, that’s my name) but it is the swagger and the complete lack of sympathy with which it is delivered that makes it live in the mind, and that’s all Baldwin. 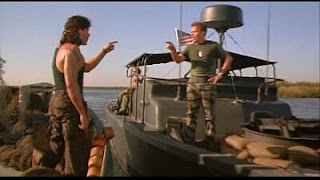 Okay, so Hot Shots: Part Deux is no Airplane, hell, it’s no Hot Shots but this one joke, which starts off with a nice Apocalypse Now spoof before the one line cameo, is funnier than every spoof movie of the 21st century so far put together. All together now… “I loved you in Wall Street”

If Judi Dench can get an Oscar for 9 minutes playing Judi Dench playing Elizabeth the First in Shakespeare in Love then Jane Adams should certainly have been nominated for her six minutes of genius here. A specialist scene stealer (see Orange County and The Anniversary Party) she manages to take you through the entire emotional spectrum during her brief screen time as Sheila, a lonely woman on a blind date with Jackie Earle Haley’s Ronnie, making you warm to her during the dinner date, and then tearing your heart out in the horrific car scene. Perfect screen acting.

When an actor didn’t show up to play Travis Bickle’s passenger in this scene Scorsese did it himself, and contributed one of the best moments in the movie. His jittery jilted husband is absolutely believable, and tremendously frightening because of it. He even manages to convincingly intimidate DeNiro as Bickle, quite a feat, and stand out in a film awash with amazing performances. Scorsese is also, incidentally, excellent in a small role in Quiz Show.

A gold medal race in the men’s acting Olympics, and there’s a photograph for first place. Walken takes an early lead with [I’m] “The anti-christ, you got me in a vendetta kinda mood” and a speech about lying, but Hopper comes right back at him with an offensive monologue about the origins of Sicilians. It’s more than the dialogue though, because both of these are beautifully layered performances. Hopper plays the knowledge that he can’t get out of this one, Walken the regret that he’s going to have to kill this man who he seems to respect and it’s that depth, those things behind the actors eyes, that really make this special.
Posted by Sam Inglis at 18:42