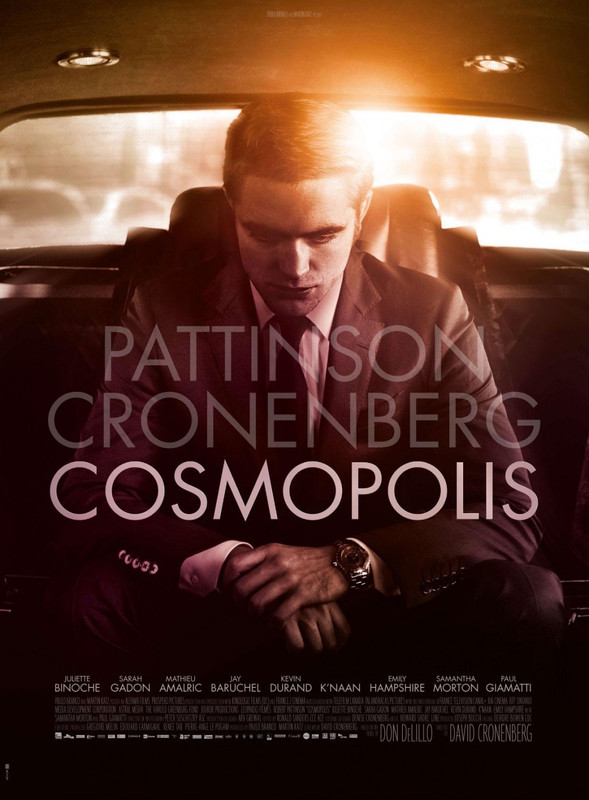 Recently, several of my favourite directors have released films that just haven't delivered on the promise of their previous work, but the really crushing blow was David Cronenberg's last films, A Dangerous Method; the dullest, most anonymous, film of his now 40 year career. When I heard that he already had another film ready, I was concerned. A furious work rate doesn't usually imply consistency (does it, Woody Allen?), and Cronenberg is far from the most prolific of filmmakers. I was even more concerned when extremely mixed word began coming out of Cannes, if there was one thing I didn't want to have to say about 2012 it was 'this year David Cronenberg released two rubbish films'.

Happily, I don't have to say that. Cosmopolis finds Cronenberg back on form, once again making challenging, searching, intriguing work that fits right within his wheelhouse as an auteur, but doesn't feel like he's going back over old ground. It may well be his best film since eXistenZ, though confirming that, and much more besides, will demand rewatches.

Based (apparently extremely closely) on the novel by Don DeLillo, Cosmopolis has as its protagonist 28 year old billionaire Eric Packer (Twilight heartthrob Robert Pattinson). Packer is on his way across town to have a haircut, but the journey is taking a long time thanks to a presidential motorcade and a funeral, so meetings and doctor's appointments are taken in Packer's 'Prousted' limousine. The day goes further and further off the rails as Packer encounters more and more people, and begins, quite possibly, to lose his mind.

As with most of David Cronenberg's work, there is a lot to say about Cosmopolis, but the first thing that has to be noted is the film's big shock (not in a plot sense, don't worry). I've said some very rude things about Robert Pattinson's performances in the Twilight series (and, sorry fans, I stand by every syllable), but he's revelatory here. The first point of comparison that comes to mind is Hayden Christensen's unexpectedly great performance in Shattered Glass. To begin with, Packer is something of a blank slate - this is a studied and affected pose, and Pattinson is effective playing it as such - but as the film goes on, as we penetrate the impossibly wordy and constructed dialogue, there are layers peeled back by the differences in the ways he interacts with the different people who drift through the film. Some of the best scenes are between Pattinson and Sarah Gadon as his young wife (she also played Emma Jung in A Dangerous Method, and was one of the best things about that film). Gadon gives a very unusual performance, even by this film's standards, but through these scenes you do feel the dislocation between Elise and Packer, and perhaps between Packer and the world at large.

There are many things that may frustrate people about the film. First of all it's fair to say that the cadence of the film; the dialogue and the way it is spoken - theatrically, almost as if it is a series of lectures at times - requires a period of adjustment because it is so completely unlike the established rhythm of either life or cinema. Give it twenty minutes to settle, because once it does it becomes clear just how much is going on here, and just how funny the film is. There are inter-personal relationships (particularly interesting in this respect is a scene with Emily Hampshire in which Packer gets his prostate examined as he takes a meeting), but there are bigger themes weaving in and out of the words here, most notably surrounding both the reality and the morality of the financial crisis and other current events (some of which, like the custard pie attack on Rupert Murdoch and Occupy Wall Street, the film mirrors in ways that are downright eerie).

Cronenberg also seems to be packing his commentary into the visuals. This is tough to describe, but bear with me, because I think it's the film's key motif. There is a visual disconnect between the inside of Packer's limo, and Packer and his wife, and the rest of the world. I don't know quite how the film was made, but it seems at times in the film's first two thirds that all the backgrounds and everything outside the limo have been digitally added around Pattinson. The effect is curious, and distracting until you think about it on a metaphorical level of this rich and powerful young man having to truly engage with the world so seldom that he is becoming physically separate from it. I don't know that this was Cronenberg's intent, but it's also supported by the fact that this particular stylisation begins to recede after Packer leaves the limo behind and, in a sense, re-enters the world. Whatever it means, it makes the film fascinating and different to look at. 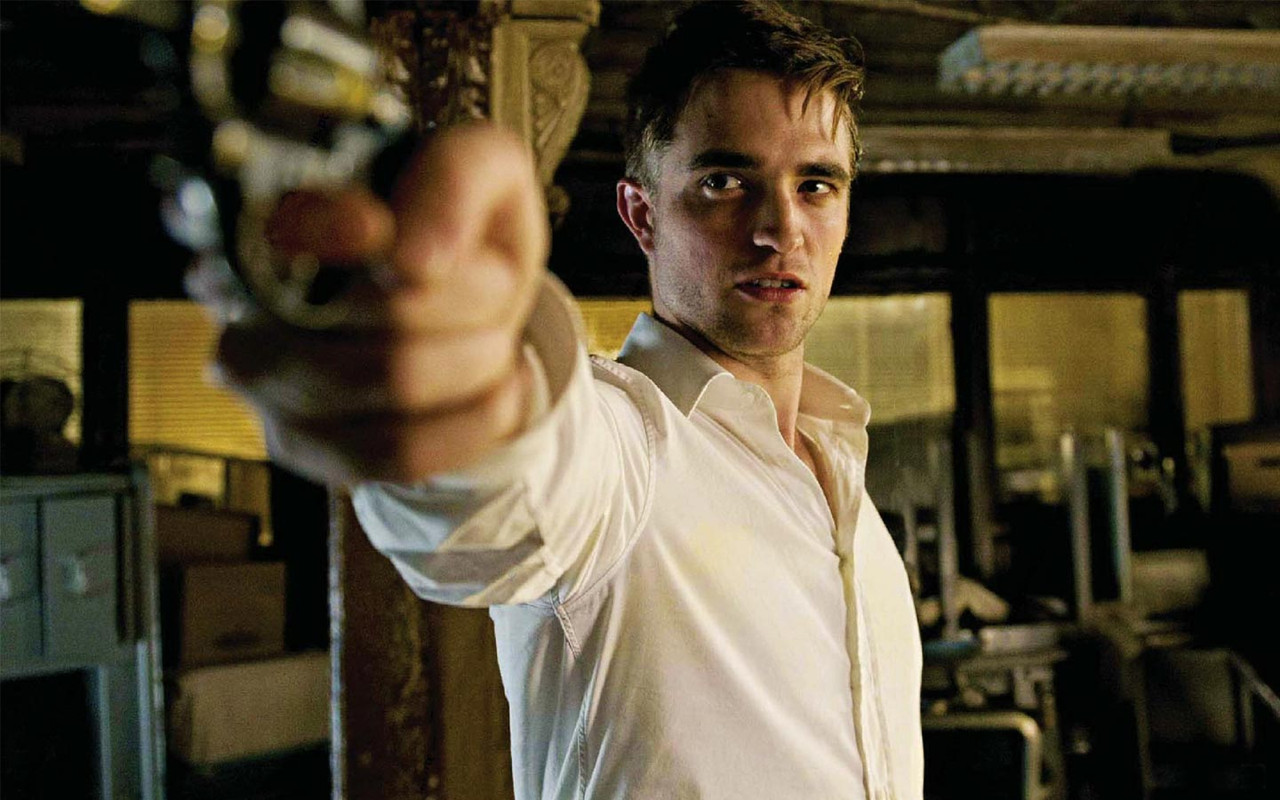 Inside the limo is almost another world: Cronenberg seems to stretch the screen to give us the odd combination of cramped and spacious that interior provides, and the visuals seem sharper on the inside, as if the world outside isn't quite as real, even when the windows open and it's JUST outside. All these things and more speak very much of Cronenberg's ever-recurring obsessions with identity, with our place in then world. There is less of the body-focused Cronenberg of old, but it's hard to ignore the frequent references to Packer's asymmetrical prostate.

The structure may be another sticking point for some people, as Cosmopolis unfolds essentially as a series of moments; individual scenes with little connective tissue or narrative drive ('I need a haircut' is basically the throughline of the 'plot'). It works, for me anyway, because most of those moments are individually brilliant, and the guest stars who come in for five or ten minutes each are frequently brilliant. Among the standouts are the aforementioned Gadon (who will hopefully have a larger part in whatever Cronenberg does next), a never sexier Juliette Binoche as an art dealer that Packer is having an affair with (and whose opening shot echoes a famous one of Holly Hunter in Crash), Samantha Morton, who makes sense of some of the film's most impenetrable dialogue, and Paul Giamatti, who by rights ought to steal the film when he turns up, but doesn't, because he seems to power Pattinson's own performance on to ever greater heights, and that scene becomes one of the unlikeliest great acting scenes of the year. The other really outstanding moment is the most awkward lunch date I've seen in ages, in which Packer and Elise talk at each other in a series of non-sequiters, Pattinson and Gadon are both brilliant here, effortlessly communicating everything about their marriage, though the dialogue is very indirect.

I'm afraid I'm neither selling nor analysing Cosmopolis especially well, because there's not really space to get into every interesting detail, because I need more time to think it through, because I need to see it again so I can immediately surrender to it rather than needing that period of adjustment, and so that I can further contextualise it as a Cronenberg film. What I can say is this; it's a major, interesting work, it should reward multiple viewings and real analysis, and I think it will remain interesting far beyond the current financial climate. It's proper, challenging, thoughtful, adult cinema, and we all could do with more than that. Welcome back David.
★★★★★
Posted by Sam Inglis at 17:33