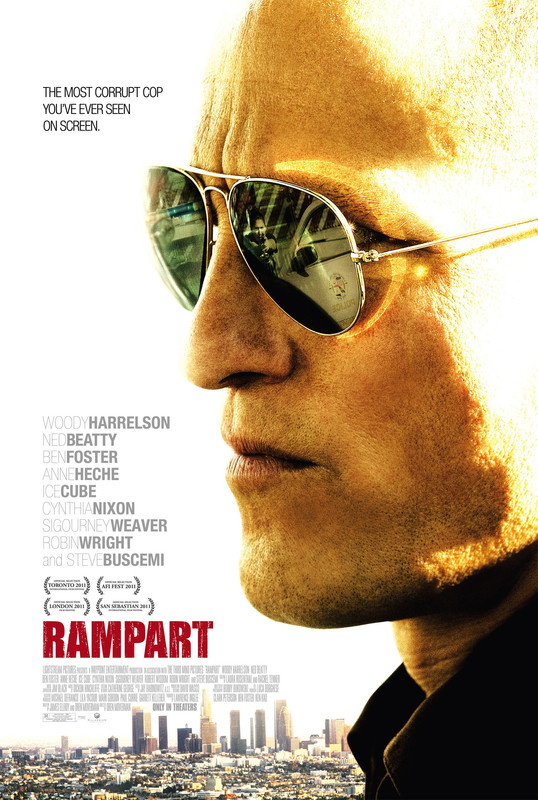 Oren Moverman makes films I feel I should like. Both this film and his previous effort The Messenger are patiently paced character studies that feel, in many ways, like throwbacks to a time when the words 'Hollywood' and 'intelligent' didn't have to be mutually exclusive. But Rampart, like The Messenger, has some very good things in it, but still drastically undershoots its overall potential.

The film takes place in 1999, and sees Woody Harrelson as Dave Brown, a corrupt LA cop with an interesting family life (a daughter by each of two sisters, played by Anne Heche and Cynthia Nixon) who has just been caught on camera beating a black suspect who crashed into his car. Brown is put on restricted duty, but as he fights being kicked off the force he drifts further from his family and regards everyone with suspicion.

The trailer is selling Rampart almost as movie version of The Shield; a bald corrupt LA cop, some family drama, a few shootouts, a smattering of sex. You do get all that, but still, this isn't really the film that has been advertised, it's much more a character study of Brown, and that's not entirely a good thing. I'm perfectly open to seeing an actor as good as Woody Harrelson - who is properly excellent in many scenes here - in a character study of a corrupt cop, but a character study can't exist simply on the basis of a strong performance, it has to be backed up by equally robust and interesting character writing, and co-screenwriters Moverman and James Ellroy never really provide that. I was anticipating watching Harrelson peel back the layers of this guy, but all we ever see is another layer of the same remorseless bastard.

The only attempt at humanising Brown comes in his relationship with his two daughters, who he does at least appear to love. Unfortunately, like every character not named Dave Brown, his daughters are terribly underwritten and so, despite a couple of nice performances from Brie Larson and Sammy Boyarsky, the storyline falls rather flat. There is a great deal of talent allowed to go to waste here, as many of the film's storylines are tremendously underdeveloped. Even Brown's troubles with his colleagues get rather short shrift, and his superiors Sigourney Weaver and Steve Buscemi get maybe four minutes screen time between them (three and a half of those minutes being Weaver's). Cynthia Nixon and Anne Heche have far too little to do, and ill-defined characters, as Harrelson's ex wives, this is a real shame, as both are fine actresses and I suspect there's an interesting film to be made about the dynamic between close sisters who each have kids by this man. More troubling is Robin Wright's role, which seems like a fantasy woman written by a man who doesn't like women very much.

Of the supporting cast only Ned Beatty really has the material to come close to matching Harrelson, but again the script leaves him and his motives rather too fuzzy, and even this storyline never quite gains traction. On the whole though the male supporting cast is just as under developed and under utilised as the women; Ice Cube makes a strong impression, but has just three brief scenes, in between which you could forget that he's in the film, and Ben Foster has even less to do and even less effect on the story.

The screenplay never really comes together, the whole film - despite centring totally on Brown - feels bitty and unfocused. There are also a few scenes that just feel totally out of place, such as Brown's red tinged descent into some sort of LA Hell (in the form of a sex club), it looks stylish, but adds nothing to proceedings. Oren Moverman isn't a bad director at all, indeed Rampart is often pretty great looking, managing to feel both modern and classic without its visuals seeming too contrived (most of the time, see previous sentence), but until his writing can match his ambition as a filmmaker he's likely to keep serving up promising, but frustratingly underachieving, fare. I want to like Rampart, feel like I should like it, but ultimately I can't wholeheartedly recommend it.
★★★☆☆
Posted by Sam Inglis at 17:32