In the next two films, the production team behind Potter made some changes, recognising that the story, characters and actors were growing up they brought in new directors with a darker vision. Most consider that this is when the films came of age. 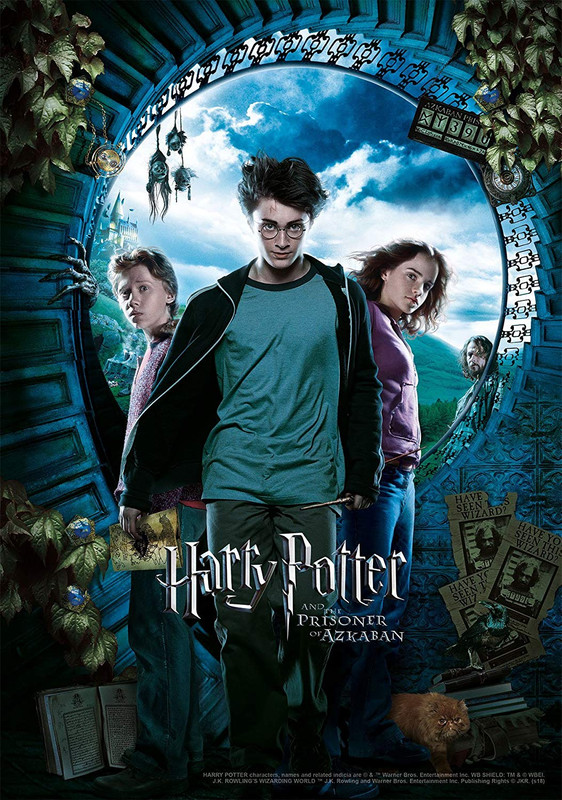 Though Chris Columbus had created a strong visual identity for the Harry Potter films, and had led his young stars to better performances in the sequels, his move on from the franchise couldn't have come at a better time. With the stars and their characters in their early teens, upheaval was in keeping with the series at this point, as was growing up. Producer David Heyman could have gone for a safe pair of hands for this third film; another journeyman like Columbus, instead the offer went out to the visionary Guillermo Del Toro (who passed in favour of the more personal Hellboy) and then to his countryman and friend Alfonso Cauron, whose varied CV took in kids movies (A Little Princess) and who was coming off the back of a - very different - film about teenagers; Y Tu Mama Tambien.

Cauron brings a distinctly different flavour to this instalment, and though the process of darkening the series began with Chamber of Secrets, it was here that it took hold, and Cauron who really set the vision for the rest of the series. Where Columbus' Hogwarts basked in sunshine and was bright and primary coloured, Cauron's is darker and more forbidding, and quite often drenched with rainstorms. Colours are desaturated, and night time scenes play in near pitch darkness, accentuating the creepy aspects of Hogwarts castle. There is also a somewhat harder (though at this stage still PG rated) tone to the film's action, which seems to leave more of a mark than it had previously, and Cauron really up the ante on scary imagery, with a great Werewolf design and transformation, and the genuinely terrifying (were I still nine) Dementors; shrouded creatures who feed on good memories, and can suck out your soul should they so please. This is not to say that Cauron is above pulling back for some lighter hearted moments, but even those are now inflected with darkness (see the way Harry's passionate anger causes the films opening slapsticky set piece).

Another thing you have to give Cauron immense credit for is the improvement in the performances from the young leads. He apparently worked them hard, even asking them to write in character autobiographies (apparently these were delivered very much in keeping with characters; a solid effort from Radcliffe, dozens of pages from Watson, while Grint turned in nothing, saying that Ron wouldn't have written the essay). Clearly being challenged and asked to really go for something more truthful than had been asked of them before paid off, because all three visibly raise their games. Emma Watson, benefiting from a larger role this time round, is perhaps most improved, while Radcliffe does some great work opposite Gary Oldman's Sirius Black.

The plot is solid and well told, and making it very personal to Harry and very connected to his past works well for both the film and Daniel Radcliffe's performance, giving the whole thing much more import than you felt (at the time at least) than either Philosopher's Stone and Chamber of Secrets had in the overall arc. It also raises the stakes, giving everything greater weight, because it's more emotional and demands more of Harry, making him seem more heroic.

The adult performers are largely as good as ever. I never warmed to Michael Gambon's Dumbledore, whose voice seems to be a series of one sentence tours of UK accents, and whose manner is very different to Richard Harris' softly spoken, grandfatherly figure. Among the new teachers, a scatty Emma Thompson is great fun as Professor Trelawny, and David Thewlis keeps us guessing about his allegiances as Professor Lupin. However, Gary Oldman steals the film with a short but resonant turn as Sirius Black; powerful enough to give his character real weight when he reappears in the fifth film. As ever, the old guard; Coltrane, and Rickman most notably, impress with colourful character turns, though Tom Felton continues to be a wooden disappointment.

The film, lensed by Michael Seresin, is much more visually dynamic than the first two entries, with Cauron's camera much more active than Columbus', exploring the nooks and crannies of Hogwarts and finding a lot of new angles on familiar sights.

On the whole, Harry Potter and the Prisoner of Azkaban is one of the best films in the series, and clearly its great leap forward from being high quality children’s films to becoming something much more resonant, and rather closer to high art.
★★★★☆


Harry Potter And The Goblet Of Fire [12]
Dir: Mike Newell 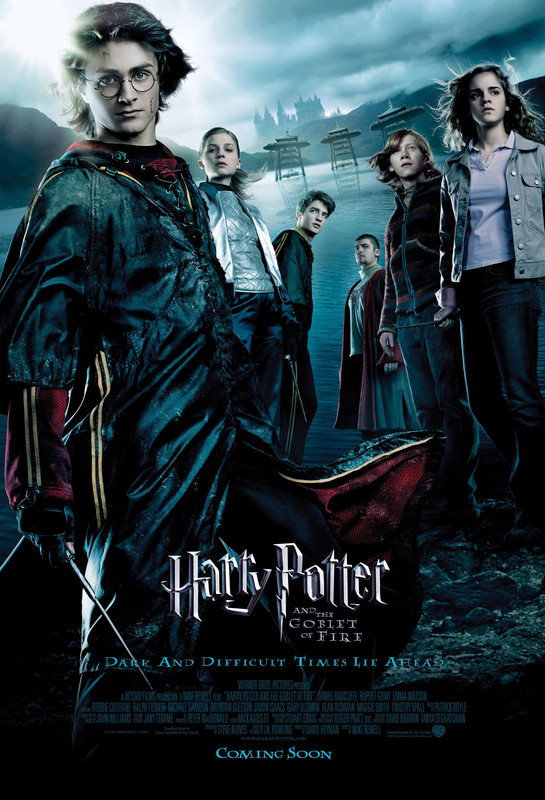 Maybe it's the fact that the characters are now 14, and thus going through the most annoying and obnoxious phase of their adolescence (hey, we've all been there), maybe it's that director Mike Newell seems a little unsure of himself, maybe it's the hilarious hairstyle choices (Daniel Radcliffe's continually surprised hair being the wooden spoon winner), maybe it's the underdeveloped new side characters... No, the problem with Goblet of Fire is that, right up until the end, it just feels inconsequential - well, that and the fact that it has to follow Prisoner of Azkaban.

The central thread of the film is given over to the triwizard tournament; a magical contest between three schools, involving three deadly challenges which a champion from each school must take pert in. Harry is supposed to be too young, but his name is drawn from the titular goblet anyway, meaning that he must compete. Sadly this is the most aimless part of the film, it provides some acceptably realised action, but the stakes feel very low (even at Hogwarts I don't buy the idea that a child will be allowed to drown in service of a contest) and the storyline adds little to the film up until the final challenge, some 108 minutes into the film. All in all, after the drama of Chamber of Secrets and Azkaban's action scenes, this just feels like franchise is treading water, however good the dragon effects are.

Also thrown into the mix are some John Hughes like high school shenanigans; rivalry between friends (Ron has several Nomi Malone like strops with Harry, which is as tiresome as you'd expect), some of which works quite well, a funny scene in which Ron has to dance with Professor McGonnagal and the central Yule ball are both welcome diversions from the rather plodding tournament plot, though the relationship dramas between the characters play out to much greater effect in the subsequent films. On the plus side though, this plot does allow Rupert Grint to have some fun, and he's very amusing here, especially when recounting how he asked visiting witch Fleur Delacourt out ("You know how I like it when they walk").

The script also has some problems; Goblet of Fire was JK Rowling's first real doorstop of a book, and screenwriter Steve Kloves hasn't found an organic way to reduce it down. Even at two and a half hours it feels brutally shortened (look at the abruptness of the Quidditch World Cup, and the underdevelopment of Robert Pattinson's Cedric Diggory). There is also a real irritant in the form of Rita Skeeter; a Daily Prophet journalist who is Rowling's, and the film's, brutally unfunny, sledgehammer subtle, parody of a tabloid reporter, and who feels completely out of place here.

I don't want to make it sound like Goblet of Fire is a dead loss though, as there is much to enjoy and admire here. Mike Newell may seem an odd fit for this assignment, but he develops the look of the series capably, bringing even more darkness to it than Alfonso Cauron, particularly in a forbidding opening sequence which really sets the tone for this entry, and provides our first sense of the series' central villain; Lord Voldemort. Also strong is the performance of new recruit Brendan Gleeson, who is hilarious as new Defence Against the Dark Arts teacher 'Mad Eye' Moody. His costume and the effects on his false eye are brilliant, and Gleeson overplays to the hilt, having a wonderful time, especially in a lesson in which he shows the students the three 'unforgivable curses'; magic so terrible that using it will get you a one way ticket to Azkaban.

However, the film really excels in its climax. If Prisoner of Azkaban saw the series begin to grown up, the end of Goblet of Fire, and specifically Lord Voldemort's haunting line "Kill the spare", sees it come of age, with a deep, dark, frightening and extremely high stakes set piece which sees Harry confront the real Voldemort (a deliciously evil and nightmarish looking Ralph Fiennes) for the first time. It is ten minutes of screen time so good that you can almost forgive the two hours of plodding it has taken to get there. What's really important about this scene, and what makes it the key to the rest of the series, is that it makes Harry's quest going forward a truly personal one - something severely lacking in the rest of this film. This one scene echoes through the rest of the series.

Overall, Goblet of Fire is be my least favourite of the series, but it makes up a lot of ground in its last twenty minutes, and is, if only on the back of those twenty minutes, a game changer for the series. It's inconsistent, but essential.
★★★☆☆
Posted by Sam Inglis at 12:29