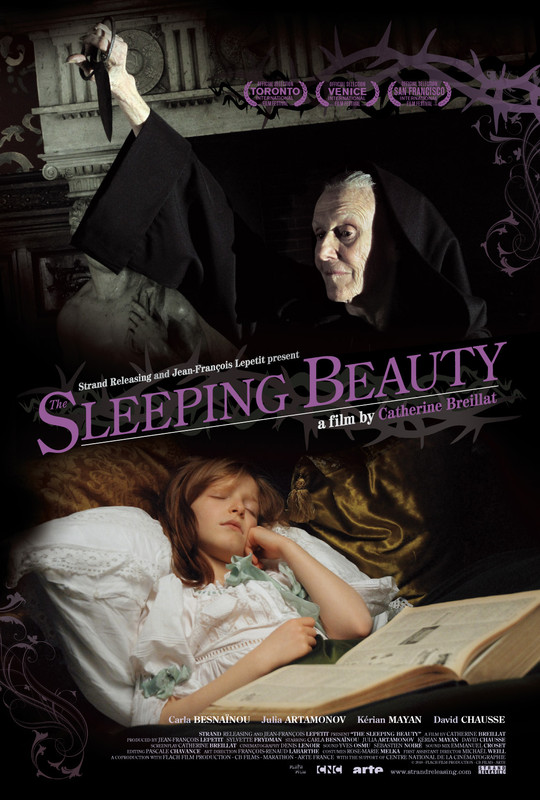 In my review of her last film, Bluebeard, I mentioned that I haven’t, until recently, got on with Catherine Breillat’s work. This is her second adaptation of a fairytale, and though it marks something of a return to her often pretentious ways of old, The Sleeping Beauty also has a great deal to recommend it.

Like Bluebeard before it, this film has a sumptuous visual style, which makes it seem as though the movie has been torn from the pages of a beautifully illuminated storybook. It seems too, that Breillat has become more comfortable with this new aesthetic; she’s moving the camera much more, with shots being more dynamic, less like artistic tableaux.

This being Catherine Breillat, The Sleeping Beauty is little like the classic fairytale. It begins traditionally enough, with three fairies (who are delayed in attending the birth because they are bathing topless in a stream), each conferring gifts on a princess named Anastasia after she is cursed by a witch. From there it becomes very odd, with the film following the six-year-old princess (Carla Besnainou) as she wanders the world in her dreams (while sleeping for a century, after which she’ll wake up aged 16). She stays with a family for a while, but when her older adopted brother Peter is seduced by the snow queen she leaves to look for him, encountering strange kingdoms, creatures, and people along the way. A century later Anastasia wakes up as a beautiful 16-year-old (Julia Artamanov), and begins a romance with Peter’s great grandson.

At times The Sleeping Beauty has glimpses of the Breillat of old; pretentious, boring, obsessed with sex, but for the most part it’s engagingly strange, and has a rather hypnotic quality thanks to the very particular and beautiful visual style, which betrays the rather unlikely influence of Terry Gilliam. The sheer visual beauty extends to the cast as well, especially the older versions of Anastasia and Peter, whose handsomeness as a couple actually aids the otherworldly feel of the film. The performances aren’t exactly brilliant, but the rather mannered acting does actually suit the film.

I’ll have to see this film again to be sure exactly how much I like it, there is a frustrating sense that the entire film is an 80 minute digression, gorgeous though it may be, but it is diverting in both the strange alternate reality it creates and in its visuals. I’m looking forward to giving it another look, and that’s not something I’m used to saying about Breillat’s work.
★★★☆☆
Posted by Sam Inglis at 11:13