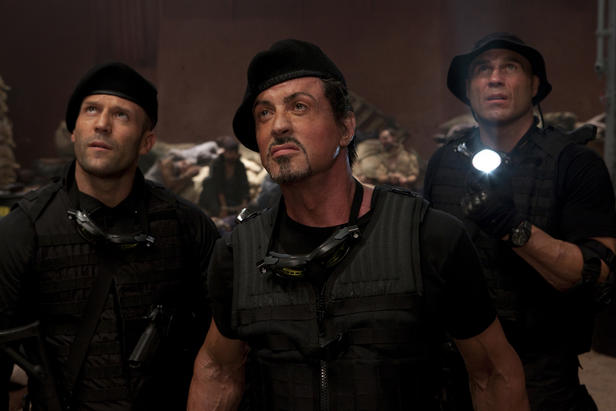 If only THE EXPENDABLES had simply lived up – or down – to it’s title. If only it were just forgettable nonsense. If only it had just been dumb, in one ear, out the other, typical action fare. Unfortunately that’s not what it is. Instead this is one of the very worst films of 2010; a cacophony of senseless, bludgeoning, unwatchable idiocy and a complete waste of an interesting cast and $80 million.

It’s not like I don’t understand what this film is; I didn’t come to THE EXPENDABLES expecting layered character driven drama or a particularly rich, metaphor-laden story. But, honestly, is it too much to ask that the characters have some motivation, some personality, and that the film as a whole makes some level of sense as a story? It shouldn’t be, even that apex of eighties action idiocy COMMANDO had, at the most basic level, a main character who had a credible motive for putting himself in harm’s way. The best motivation Stallone seems able to conjure for his character, Barney Ross, leading his team to near certain death is some vague guff, mumbled by a clearly bored Mickey Rourke, about women and soul, and the fact that the girl Barney wants to save (having known her for about an hour) gave him a drawing.

The other attempts to inject some sort of depth into the film are also laughably tossed off, and only one has any bearing on anything that happens in the film. Dolph Lundgren’s Gunner, for example, is frequently described as a junkie, yet we see no evidence of this and it has no effect on anything. Jason Statham, as Stallone’s right hand man Lee Christmas (really, Sly?) gets a ‘romantic sub-plot’ co-starring Charisma Carpenter. It lasts all of two scenes, perhaps three and a half minutes of screen time, and, again, has absolutely no relevance to anything. The only piece of ‘character development’ that has any bearing on the film is that after being teased for being short Jet Li uses his small stature to his advantage in a fight.

The acting is as miserable as the writing. Nobody speaks; they grunt. Watching Stallone and Lundgren exchange dialogue is especially laughable, as they seem to compete to see who can intone their words in the lower, more indecipherable, bass rumble. Lundgren wins, thanks largely to his accent. It’s perhaps churlish, given the monumentally awful and shallow screenplay, to note that not a single member of the large cast develops anything you could call a character. Churlish, but true all the same.

Let’s be realistic about this though; it doesn’t matter much if THE EXPENDABLES is badly written or acted, what matters is the action. You’ve get here several generations of great screen fighters; surely the action is awesome, right? Well, I’d love to be able to tell you about the action, but I couldn’t see it. That’s down to Sylvester Stallone’s frankly appalling direction. It’s bad enough outside of the action scenes, in which he shoots roughly 75% of the film in uncomfortable close up, but it’s when people start fighting that everything really goes to shit. Stallone’s cutting is so blisteringly fast that nothing makes the slightest bit of sense (so much so that I was genuinely surprised, in one last reel fight, when it finally became clear that it was Randy Coture, and not Jet Li, fighting Steve Austin). The spatial relationships go completely out of the window, so you never know who’s fighting who, where they are in relation to each other or the other characters, or what they are doing to each other.

The editing is a truly hideous thing. Worst affected is Jet Li, who worked with veteran action director Corey Yuen to choreograph his fight with Dolph Lundgren. You have no idea how much I wish I could have seen some of that fight, but Stallone and editors Ken Blackwell and Paul Harb appear to have turned the footage over to a roomful of chainsaw wielding, meth smoking monkeys and then given the resulting mess to a six year old with some sellotape. That or they are shit at their jobs… your call. The editing, offence to god and man though it is, is hardly the only visual problem with THE EXPENDABLES. On the whole Stallone’s direction is ugly and frequently nonsensical, but it’s also poorly served by some of the worst CGI I’ve seen for years. Especially embarrassing is a shot in which Stallone slices off the heads of two soldiers, who are decapitated using effects that make Mortal Kombat seem advanced, but the whole film is afflicted by terrible CGI splatter and some genuinely shocking compositing.

THE EXPENDABLES is a total embarrassment. It’s about as much fun as getting a splinter in your eye, and so poorly made at a basic technical level that it is all but unwatchable.
Posted by Sam Inglis at 10:12