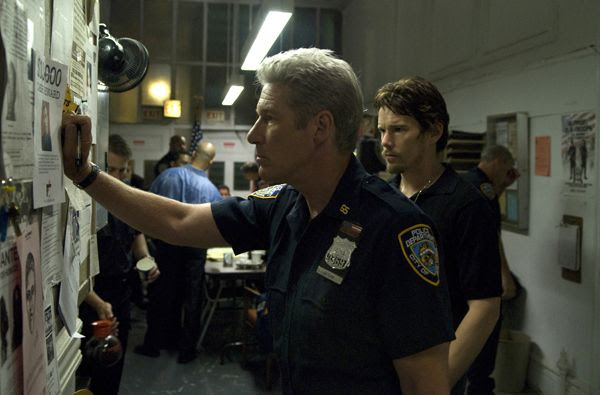 I saw Antoine Fuqua’s previous police drama, Training Day, at the Venice Film Festival back in 2001, an odd way to see a very mainstream film. I remember liking it a great deal right up until it ended, and then hating it for the 30 minutes it continued after that ending. Brooklyn’s Finest is a considerably better film, it’s more complex, better acted and looks great. Sadly it is still dogged by a poor ending which, after almost two hours of intense, generally relatively down to earth, drama piles contrivance on contrivance in the film’s last twenty minutes, to little real purpose or effect.

There are three stories, which we follow concurrently, though they are only really connected by the fact that the protagonists in all three are New York policemen. There’s Sal (Hawke); a devout catholic and family man with a pregnant wife (the excellent and underused Lili Taylor) who is driven to corruption in pursuit of a down payment on a new house. There’s Eddie (Gere); a 22 year veteran who has lost any sense of purpose as cop and is serving out his last week and there’s ‘Tango’ (Cheadle); an undercover operative who wants out, but has to deliver an old friend (Snipes) to his superiors to get the desk job he wants.

Of these three stories two work really well, and one just never quite fits. Eddie’s story isn’t uninteresting, nor is it badly produced. In fact this performance ranks with Richard Gere’s best work (he’s become a much more interesting actor now that he’s less able to get by on charm and good looks). The problem is that it lacks the drive and the urgency of Sal and Tango’s stories, and when it does acquire those qualities the change in Eddie’s outlook never feels organic, it’s driven by the plot, rather than driving it.

As Sal Ethan Hawke gives another performance that demonstrates that when he’s allowed to stretch, an especially when he’s allowed to go somewhere dark, he’s a lot more than the Gen-X pinup that many had him pegged as. Sal’s desperation is etched on his increasingly gaunt face and in a haunted look in his eyes that seems to grow more intense with each scene. You should hate the guy, in the first scene he murders someone (a cameoing Vincent D’Onofrio, demonstrating just how deep the selection of quality acting talent runs in this film) for the money he needs for that house, but thee film doesn’t make Sal a simple bad cop, and Hawke always manages to articulate how conflicted he is and, especially importantly, how much he loves his wife and kids. It’s not the most complex character writing you’ll ever see, but when one trait is considered enough to constitute a character, I’ll take what I can get in terms of layers. 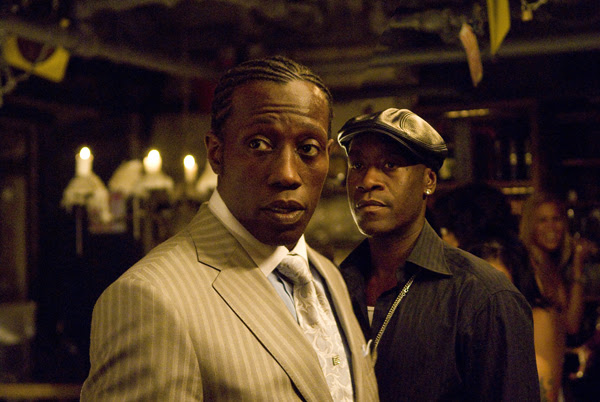 Don Cheadle, recently seen apparently bored out of his mind in Iron Man 2, is equally good and also manages to bring a lot of layers to his character. We’ve seen Tango’s story before (there’s more than a shade of Donnie Brasco about it), but it does boast some energetic and exciting performances. Perhaps the biggest surprise in the bunch is Wesley Snipes who, after a few years in the DTV doldrums and having snored his way through Blade: Trinity, seems reinvigorated here. He’s charismatic and entirely unforced as recently released drug dealer Casanova, and in his many scenes with Cheadle and Michael K Williams he more than holds his own. On the other side of the law there’s Ellen Barkin, as the FBI agent giving Cheadle his orders. It’s been a while since we’ve seen her, and she’s great as Tango’s ball busting superior (there’s also a nice little nod to her past elsewhere in the film, as Gere sings Sea of Love to his girlfriend).

What’s really impressive about Brooklyn’s Finest is how well balanced it is. Fuqua and editor Barbara Tulliver keep all the stories moving at a good pace, never backing away from any of them for too long, never letting you start wondring where any of the characters has disappeared to. The editing is consistently impressive here, maintaining the pace of the film while never degenerating into the MTV style mess tthat many films with even the smallest amount of action can quite often become these days. If anything, Fuqua’s shooting and editing style here feels more the product of the 70’s. The film has a gritty look to it, and, happily, Fuqua isn’t afraid to hold shots, often for quite some time. There are pacier sections, but crucially, even during the film’s final sequence, which consists of three different confrontations in three different parts of the same building, Fuqua always keeps the geography of each shot and sequence clear and intelligible - a small thing, but one so many directors now seem incapable of.

I just wish that screenwriter Michael C. Martin hadn’t felt the need to draw all his strands together at the end of the film. The way it happens is contrived and messy, and for the first time I began really seeing the structure of the film, rather than just getting into the storytelling and the performances. Most of all though, it just isn’t required. There is no reason for the three stories we’ve so far followed almost entirely separately (there are a couple of crossovers, but they are kept very low key) to have to end at the same place. It doesn’t add any real meaning, nobody interacts, so why do it? It’s a shame, because that one amateurish choice undermines what is actually a rather interesting film, if hardly a groundbreaking one.
Posted by Sam Inglis at 16:34