WHY IS IT ON THE LIST?
Pixar have always been able to appeal to both kids and adults, and for me Monsters Inc. is probably the film that best caters to both audiences at once. Kids have the funny and cute monsters, and the idea of a child lost in a world of monsters, while adults can get caught up in the beautifully drawn relationships between the characters, especially the growing bond between top scream collector Sulley (John Goodman) and ‘Boo’ a two year old girl who has accidentally got into Monstropolis.

Among the many things to love about Monsters Inc. the one that I find goes unremarked on too often is the sheer cleverness of its conceit; taking a fear most of us had as children, making it real, but then giving the monsters a reason to scare children (their screams are Monstropolis’ source of power) as well as allowing the monsters to be appealing, even to kids, this adds a level of satire that a lot of adults can appreciate (and addresses it a bit more subtly than the later The Incredibles approached its satire of blue collar jobs. But tht’s just what gets the movie moving, what really makes it play isn’t so much the broad strokes, as ever with Pixar, it’s in the detail.

First off, the character design is lovely, the monsters are plausible scarers, but also visually appealing. Sulley in particular is a masterpiece of design, animation and extremely complicated physics programming. Pixar had been trying to do hair since Toy Story, but it was only with Sulley that they really got it right, pioneering a simulation that allowed each of his hairs to move individually. Mike Wazowski (Billy Crystal) is also an appealing character, but what’s most impressive about him is the sheer amount of expression Pixar give him, despite the fact that, as an eyeball with arms, legs and a mouth, there’s not a great deal for them to work with.

Obviously the vocal performances are top notch, Goodman is the real standout; fierce, funny, but also tender and affecting when it comes to Sulley’s relationship with Boo (voiced by the two year old daughter of one of the animators). It’s his performance that really allows you to buy into that relationship, and without that the whole film would fall apart. Crystal is also excellent, and though they were seldom recorded together you can feel a real connection, get a sense of a long friendship, between Mike and Sulley through Goodman and Crystal’s work. Crystal also gets the lion’s share of the jokes (many of which he improvised), really grabbing hold of the opportunity to work with Pixar, having turned down the role of Woody in Toy Story. There are also strong contributions from Steve Buscemi as the villain, Jennifer Tilly as Mike’s girlfriend and Pixar lucky charm John Ratzenburger as a very friendly abominable snowman. The emotional heart of the film though is Boo, and the sound editors have done a wonderful job taking little Mary Gibbs vocalisations and editing them into something really expressive and endearing. I defy you not to be moved by this film, especially the ending, in which Boo’s excited gasp of “Kitty!” always has tears pricking at my eyes.

There’s so much to love in this film from the characters to the jokes to the story, right down to the beautifully fluid animation and the bright, appealing, design of the world. The fact that it’s not Pixar’s best speaks only to the sustained quality of their work. 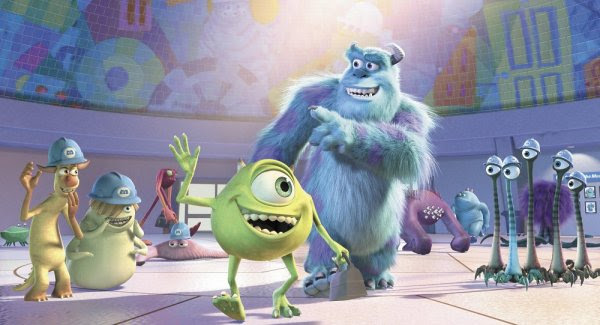 STANDOUT SCENES
Scare training
The excellent cold open, which starts with a clichéd scary monster, but soon comes crashing down in hilarious fashion.

The machine
Sulley thinks Boo has gone through a garbage press. His stricken reactions are direct visual quotes of the classic cartoon Feed the Kitty.

“Kitty!”
If this doesn’t make your heart soar and your eyes damp then you and I have nothing to say to one another.

Sulley: Hey, Mike, this might sound crazy but I don't think that kid's dangerous.
Mike: Really? Well, in that case, let's keep it. I always wanted a pet that could kill me.

Mike: I think I have a plan here: using mainly spoons, we dig a tunnel under the city and release it into the wild.
Sulley: Spoons?
Mike: That's it, I'm out of ideas. We're closed. Hot air balloon? Too expensive. Giant slingshot? Too conspicuous. Enormous wooden horse? Too Greek.