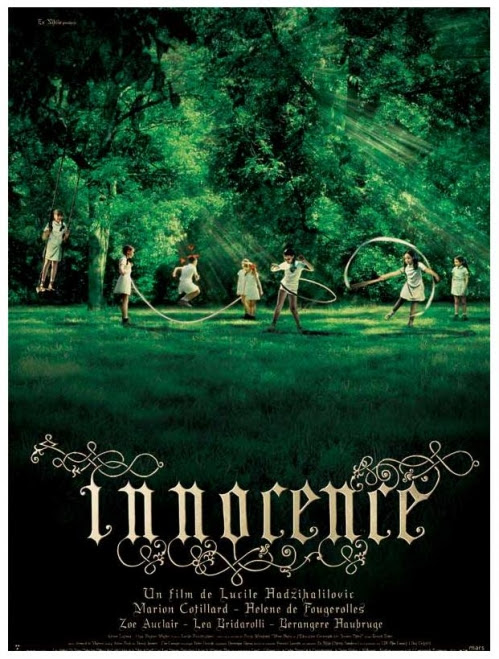 WHY IS IT ON THE LIST?
Innocence is one of those rare films that, even after several viewings, still baffles me each time I see it. Much of its symbolism is easy enough to interpret, but as to what the actual reality of the film is, that still genuinely puzzles me. It is set in what seems to be an orphanage, with girls aged from about five to eleven organised into groups with one girl of each year in each group, and an age based hierarchy signified by coloured ribbons in each girl’s hair. The girls are generally left to their own devices, swimming and playing much of the time. There are few adults, bar a biology teacher (Helene De Fougerolles) and a ballet teacher (Marion Cotillard) and a seldom seen headmistress, who appears annually and holds a strange contest, taking the winner; a girl of about ten, away with her.

The eldest girl in each group is obliged, every night, to go along to the main building in the idyllic grounds, where they perform ballets for an unseen audience. Odd really only begins to describe the feeling conjured by this film. Like all the great surrealist works, Innocence conjures a completely credible world, which is nevertheless completely removed from reality. I have my own pet theory about what the orphanage may be (particularly given how the new arrivals are transported, and the idyllic tone of the final scene), but that’s beside the point, because Innocence is all about asking the audience to interpret what’s going on.

Debuting director Lucile Hadzihalilovic is married to the notorious French provocateur Gaspar Noe, and though Innocence is a far less confrontational or explicit film than any of his it does share certain qualities with Noe’s filmography. The first of them is the sheer visual mastery with which the film is framed, lit and shot. Every moment has a dreamlike beauty about it (look, for example, at the gorgeous shots in which the girls walk along the incongruously lit paths to their nightly show and the many sequences of the children playing in what almost seems, at times, like their own private heaven). Another quality Hadzihalilovic seems to share with her husband is an ability to create a sense of foreboding. Here she’s perhaps more impressive than Noe, because Innocence creates this creeping, oppressive feeling without any use of sex, violence or any other extreme content. Instead the film deals, like the works of Michael Haneke, in constant unease.

The acting is perhaps not the film’s primary concern, but from her young and untested cast (drawn from ballet classes) Hadzihalilovic draws some sterling performances. Best of all, she lucks out with her leads, the bond that forms between new arrival Iris and eldest girl Bianca is nicely drawn and feels organic in the playing.

Innocence is a beautiful, bizarre, haunting piece of work, films like it don’t come along very often, and for that reason it should be more widely seen and cherished. Please see it, and let me know your interpretation of this fascinating film.

STANDOUT SCENES
Iris’ arrival: This first scene introduces us to a very strange world, and to the hypnotic tone of the film.

The competition: The film’s most troubling scene, a genuinely creepy few minutes that make what surrounds the story off screen even more unsettling and even more fascinating.

To buy the DVD and help 24FPS out at the same time, use the links below. Thanks.