High-flying executive Margaret (Bullock) hasn’t completed her immigration procedures, and she’s being threatened with deportation from the US back to Canada. Not wanting to lose her job, Margaret blackmails her assistant Andrew (Reynolds) into marrying her. That same weekend the ‘happy couple’ jet off to Alaska, to attend the 90th birthday party of Andrew’s Grandmother (White) and to tell his parents (Steenburgen and Nelson) of their engagement.

I understand that genre films are popular because they are ‘safe’. Audiences go in largely knowing what they are going to get, it’s delivered, and they come out satisfied. Really though, The Proposal is so formulaic that, after looking at that brief summary above, I reckon that any one of you reading this review could tell me almost beat for beat what happens (and if you got it wrong I’m guessing that you’d end up writing a better, more original film). It’s amiable enough, completely inoffensive, and if all you’re looking for is a cookie cutter rom-com that you can turn your brain off to, well you could do worse. It’s just so utterly familiar though, and worse than that it’s a real waste of some very talented people.

This isn’t to say that The Proposal is all bad. It is saved from total worthlessness largely by the presence of its male lead. Ryan Reynolds seems to specialise in taking roles in the worst movies he can find, and then making them watchable through his sheer screen presence. Remember Blade: Trinity, in which his endless wisecracking (including calling Parker Posey a “cock juggling thunderc**t”) was the only thing that stopped me from walking out? Similarly he brought enough presence to the table in ten minutes of X-Men Origins: Wolverine to make a Deadpool movie appear a good idea. To be fair he had an assist from the equally great Anna Faris in Just Friends, but between them they made even that piece of crap watchable. For The Proposal Reynolds turns the leading man charm up to 11, and again showcases his excellent comic timing, making every line, however hackneyed (and they are VERY hackneyed) play, and demonstrating an aptitude for physical comedy. In perhaps the film’s best scene Reynolds is struck dumb when, without having consulted him, Bullock announces to their bosses that they are getting married. He’s not subtle, but he’s very, very funny in this scene, and it's his performance that is responsible for most of the moments that work in the movie.

Bullock can’t really match Reynolds. At a basic level she feels miscast as this supposed hard-nosed business bitch. In the early scenes she just isn’t nasty enough – she seems pragmatic to the point of ignoring anyone else’s feelings, but she’s not the evil dragon that the film wants us to see her as, because it doesn’t want its heroine to be too unsympathetic. Even this level of bitchiness is an odd fit for Bullock, she pulled out a fine dramatic performance in Paul Haggis’ much overrated Crash, in which she was a genuinely awful person, but she just can’t square this character with her bubbly rom-com persona. There’s also the issue of Bullock’s age, she’s 44, just 11 years Reynolds’ senior, and she looks somewhat younger (though the combination of Botox and a very tight ponytail make her look a bit stretched here) and they don’t really seem enough of an odd couple.

Not every film needs to be realistic, but every film does need to feel true within the boundaries of its own world, whether that means documentary style reality or surreal flights of fancy. That’s the major problem with The Proposal; it never rings true. The chemistry between Bullock and Reynolds ought to grow organically, but instead their eventual feelings seem to arise out of nowhere and nothing, making the film’s last reel all but inexplicable. This is also true of much else in the film – the fractious father/son relationship and its resolution both play like lessons out of a screenwriting 101 book, and Betty White’s native American style chanting has clearly been put in purely so Bullock can embarrass herself in the film’s most groaningly unfunny sequence. 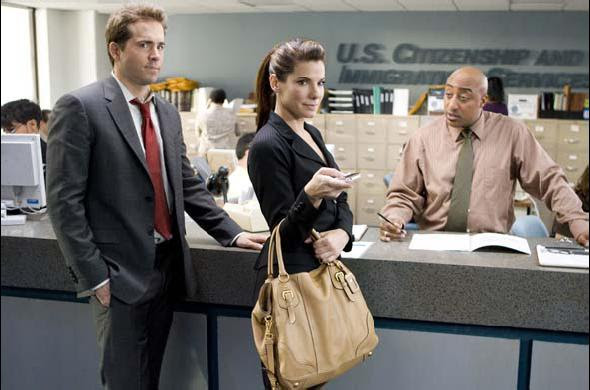 There is much talent associated with The Proposal, and most of it is wasted. Most notable is the case of Mary Steenburgen, marooned in a total nothing of a role as Reynolds’ mother. I love Mary Steenburgen; she’s one of those wonderful character actors who you just look forward to seeing because they are always worth watching, even in the worst of movies. She does what she can here, and is an effortlessly warm presence in the movie, but it’s just a shame to see someone so gifted being asked to do so little. I think there’s a much better film to be made with this cast and this premise. Keep Ryan Reynolds where he is, cast Bullock as his older sister, and make Mary Steenburgen the boss, and there, instantly, is an idea more open for comic conflict.

Director Anne Fletcher (Step Up, 27 Dresses) shows little flair behind the lens. One key comic set piece, in which a naked Reynolds and Bullock crash into one another, is fumbled by a mixture of poorly chosen angles and Bullock’s airtight nudity clause, and the rest of the movie looks like a generic sitcom. It’s set in Alaska, but really we could be in Anytown USA, even the opening New York scenes lack a real sense of place. There’s nothing really inept about Fletcher’s direction, but it’s stiff and really rather boring in its phoned in competence.

As a romantic comedy The Proposal fails because it’s totally unromantic and it isn’t all that funny. It’s populated with cardboard characters saying lines and enacting situations we’ve seen spoken and played a hundred times before, and frequently better. Yes Ryan Reynolds saves it from total irrelevance, but ‘not completely worthless’ is hardly a ringing endorsement. 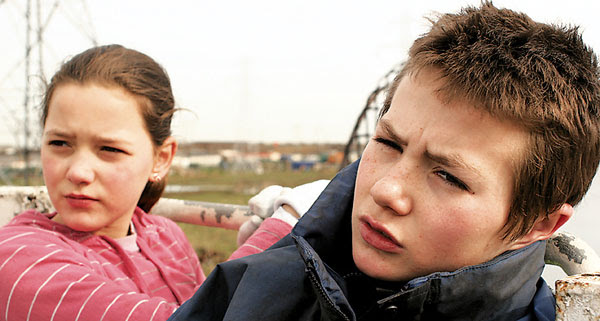 After hearing her friend Dylan (Curry) have a violent argument with his Father, Kylie (O’Neill) helps Dylan escape his house, and the two ten year olds run away together. Over the course of 24 hours they search Dublin for Dylan’s older brother and try to survive on their own.

Too many films don’t know when to end. Witness the two and a half mind pulverising hours of Transformers. So, at a time when even movies with absolutely no content are becoming endless, it is a joy to find a film like Kisses. Only Director Lance Daly’s second feature, Kisses is a small (72 minutes), but perfectly formed tale of two kids lost in a world too grown up for them to cope with. Unlike most films about childhood Kisses lacks any sentimentality. There is a street level grittiness about this film, a grimy feel that’s never false or forced. This doesn’t make Kisses an easy film to watch, but it does make it a good deal more true, and thus a good deal more affecting, than almost any film you’ll see this year.

I recently heard George Lucas say that most children can’t act, because acting is experience, and children lack experience. Some children, to be fair, can’t act because George Lucas is directing them. But he makes a good point, and perhaps the reason that Lance Daly gets such remarkable performances from his young non-professional leads is that he doesn’t seem to ask them to go far beyond their real experiences, and even when he does, everything here is so solidly grounded in reality that it can’t have been hard for Kelly O’Neill and Shane Curry to put themselves in their characters places.

Those places are seriously dark. Both Kylie and Dylan come from abusive homes, and it’s easy to see why the streets appeal to both of them, despite the dangers out there. Daly is so dedicated to this darkness that you never quite know where the film is going to go next, and at one point it took a turn so unspeakably dark and frightening that I was simply stunned that the film had the guts to go there. I won’t divulge that twist, other than to say that is both a shocking and a thrilling sequence, and one of the moments that will stay with me from the movies of 2009.

Another thing that will stay with me is the acting in this film. Curry and O’Neill both give performances that belie their tender years, and that impress with their unaffected naturalism. There’s a totally unforced chemistry between the kids, a palpable sense of a growing friendship, but what neither Daly’s script nor the actors ever forgets is that these are 10 year old kids, the way they both tease one another feels like it might be improvised. They are, in short, allowed to behave exactly as children behave. They swear, they fight and they tease one another as well as having their moments of closeness, protecting each other and, of course, kissing.

The only artificial moments in the film come not from the kids but from the adults. Paul Roe drops the ball, giving a rather wooden performance as Dylan’s Da, and the rest of the adults in the cast aren’t a great deal better. However, the focus is almost always on Dylan and Kylie, and when that’s the case it is an almost unqualified success.

Daly’s direction is as low key as his screenplay. Shooting handheld, on grainy stock, gives the images a documentary immediacy that makes you feel very close to Dylan and Kylie. The only real directorial trick is in the use of colour, which becomes more saturated the happier Dylan and Kylie are in one another’s company and fades to stark black and white when they are at home. It’s a nice reflection of the film’s mood, and only feels gimmicky once, in the film’s sole soppy moment, just before the credits roll.

Kisses put me in mind of Richard Linklater’s Before Sunrise (if that film were unremittingly dark, and starred sweary 10 year olds); a boy and a girl getting to know one another over a night in a city that is strange to both of them. This is a harsh and difficult film, and it is a bit rough around the edges, but for all its darkness Kisses also charms and, for the most part, is a real gem
Posted by Sam Inglis at 14:27